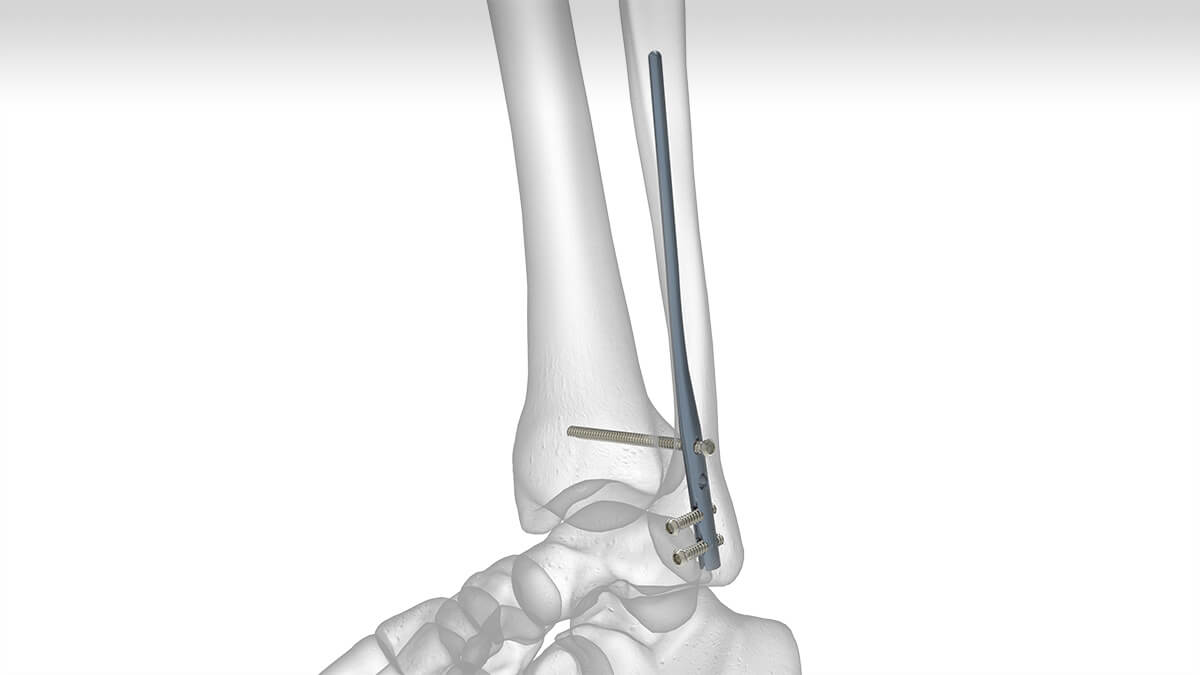 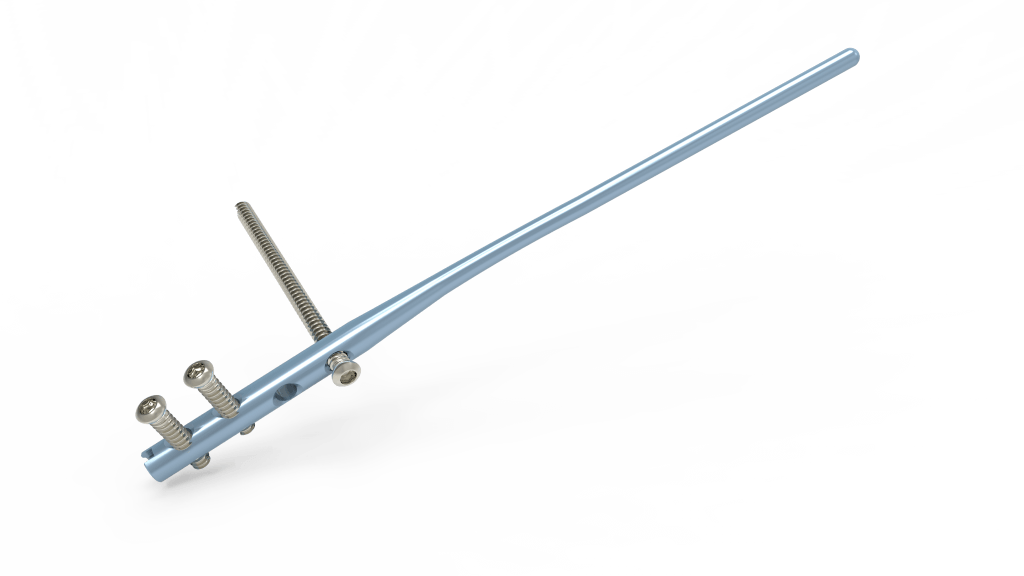 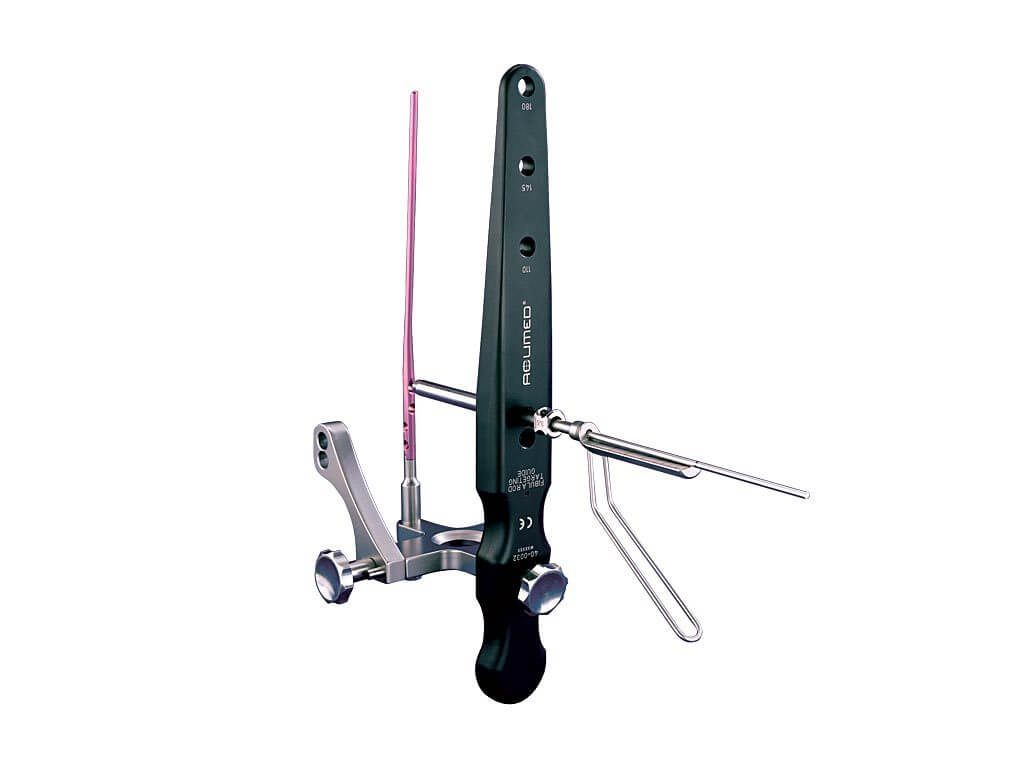 Postoperative infection is a severe complication after operative treatment of ankle fractures, associated with age, comorbidities, and severe soft tissue injuries. We assessed the efficacy of intramedullary fibular nailing for treating ankle fractures in patients at high risk of wound complications.
41 high-risk patients were included in the study. We retrospectively reviewed the medical records to assess the risk profile, the treatment data, and possible infections and re-operations. After a minimum of 2 years eight patients had died, three had advanced-staged dementia and two were lost to follow-up. Remaining 28 patients reported the functional outcome and QoL through patient-reported questionnaires. Radiographs and cone-beam computed tomography were performed, as well as range-of-motion was measured.
No surgical wound infections were found. The mean Olerud-Molander score was 67 points (SD 28 [20-100]). The osteoarthritis stages and the range-of-motion were significantly different between the injured and uninjured ankles, but we detected no significant effect on the QoL.
Intramedullary fibular fixation appeared to be a safe treatment choice for ankle fractures in high-risk patients.
IV

Ankle fractures are extremely common and represent nearly one quarter of all lower-limb fractures. Techniques for fixation of displaced fractures of the lateral malleolus have remained essentially unchanged in recent decades. The current gold standard of treating unstable fractures is with open reduction and internal fixation (ORIF), using plates and screws construct. This study evaluates the use of fibula intramedullary nailing based on minimal invasive surgical approach.
Thirty-nine cases treated with fibula intramedullary nailing between the years 2014-2016 were retrospectively studied. A fibular nail was utilized for the treatment of various ankle fractures either as the sole method of fixation or combined with another method. Patient charts were reviewed for fracture patterns, comorbidities, quality of reduction, complications and additional surgeries.
Out of 39 cases in the study cohort, 37 were closed fractures while 2 had an associated medial malleolus open injury. According to Weber classification of lateral malleolus fractures, 20 cases were type B, 18 cases type C, and one case of a pathologic fracture type B like fracture. Quality of reduction was based on previously published criteria. It was determined to be good in 32 cases, fair in 5 cases and poor in 2 cases that were revised intraoperatively to plate fixation. Overall no systemic complications occurred. Eight patients have undergone additional surgeries, namely hardware removals. In two cases, the nail was later revised to a different fixation method: one case to a plate, due to secondary displacement at 2 weeks, and one to an intramedullary tibiotalocalcaneal arthrodesis secondary to hardware failure and Charcot neuroarthropathy.
Intramedullary fibular nail offers a satisfactory and safe procedure to establish good reduction and fixation of lateral malleoli fractures. It may be considered as treatment of choice for patients with soft tissue problems due to its minimal invasive approach. The current study shows that while good fracture reduction can be achieved, without major complications, more than fifth of patients, required secondary procedures, mainly hardware removals.
Level IV

Internal fixation of the fibula in ankle fractures: a prospective, randomized and comparative study: plating versus nailing

The fundamental concept of open reduction and internal fixation (ORIF) of ankle fractures has not changed appreciably since the 1960s and, whilst widely used, is associated with complications including wound dehiscence and infection, prominent hardware and failure. Closed reduction and intramedullary fixation (CRIF) using a fibular nail, wires or screws is biomechanically stronger, requires minimal incisions, and has low-profile hardware. We hypothesised that fibular nailing in the elderly would have similar functional outcomes to standard fixation, with a reduced rate of wound and hardware problems.
A total of 100 patients (25 men, 75 women) over the age of 65 years with unstable ankle fractures were randomised to undergo standard ORIF or fibular nailing (11 men and 39 women in the ORIF group, 14 men and 36 women in the fibular nail group). The mean age was 74 years (65 to 93) and all patients had at least one medical comorbidity. Complications, patient related outcome measures and cost-effectiveness were assessed over 12 months.
Significantly fewer wound infections occurred in the fibular nail group (p = 0.002). At one year, there was no evidence of difference in mean functional scores (Olerud and Molander Scores 63; 30 to 85, versus 61; 10 to 35, p = 0.61) or scar satisfaction. The overall cost of treatment in the fibular nail group was £91 less than in the ORIF group despite the higher initial cost of the implant.
We conclude that the fibular nail allows accurate reduction and secure fixation of ankle fractures, with a significantly lower rate of soft-tissue complications, and is more cost-effective than ORIF.

To determine whether treatment of isolated stable Weber B type ankle fractures with a cast or a simple orthotic device for three weeks produces non-inferior outcomes compared with conventional immobilisation in a cast for six weeks.
Randomised, pragmatic, non-inferiority, clinical trial with blinded outcome assessment.
Two major trauma centres in Finland, 22 December 2012 to 6 June 2016.
247 skeletally mature patients aged 16 years or older with an isolated Weber B type fibula fracture and congruent ankle mortise in static ankle radiographs.
Participants were randomly allocated to conventional six week cast immobilisation (n=84) or three week treatment either in a cast (n=83) or in a simple orthosis (n=80).
The primary, non-inferiority, intention-to-treat outcome was the Olerud-Molander Ankle Score at 12 months (OMAS; range 0-100; higher scores indicate better outcomes and fewer symptoms). The predefined non-inferiority margin for the primary outcome was -8.8 points. Secondary outcomes were ankle function, pain, quality of life, ankle motion, and radiographic outcome. Follow-up assessments were performed at 6, 12, and 52 weeks.
212 of 247 randomised participants (86%) completed the study. At 52 weeks, the mean OMAS was 87.6 (SD 18.3) in the six week cast group, 91.7 (SD 12.9) in the three week cast group, and 89.8 (SD 18.4) in the three week orthosis group. The between group difference at 52 weeks for the three week cast versus six week cast was 3.6 points (95% confidence interval -1.9 to 9.1, P=0.20), and for the three week orthosis versus six week cast was 1.7 points (-4.0 to 7.3, P=0.56). In both comparisons, the confidence intervals did not include the predefined inferiority margin of -8.8 points. The only statistically significant between group differences observed in the secondary outcomes and harms in the two primary comparisons were slight improvement in ankle plantar flexion and incidence of deep vein thrombosis, both in the three week orthosis group versus six week cast group.
Immobilisation for three weeks with a cast or orthosis was non-inferior to conventional cast immobilisation for six weeks in the treatment of an isolated stable Weber B type fracture. 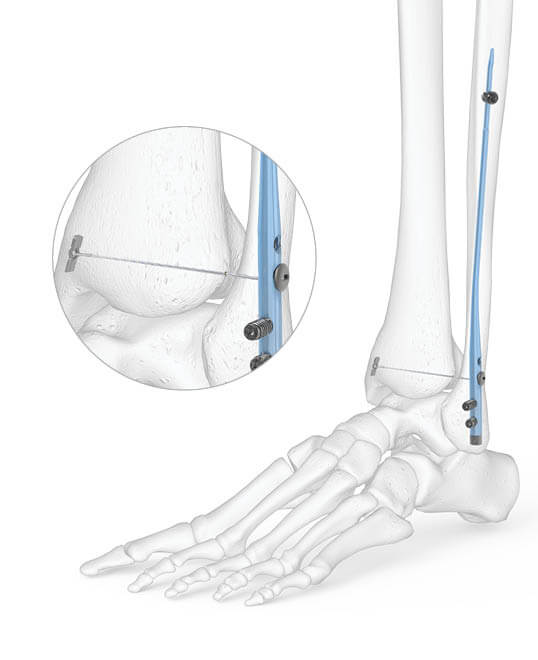 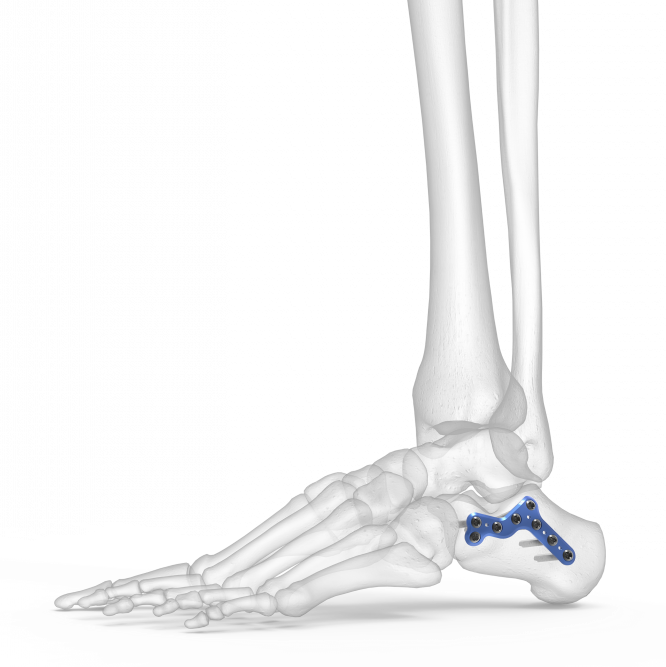 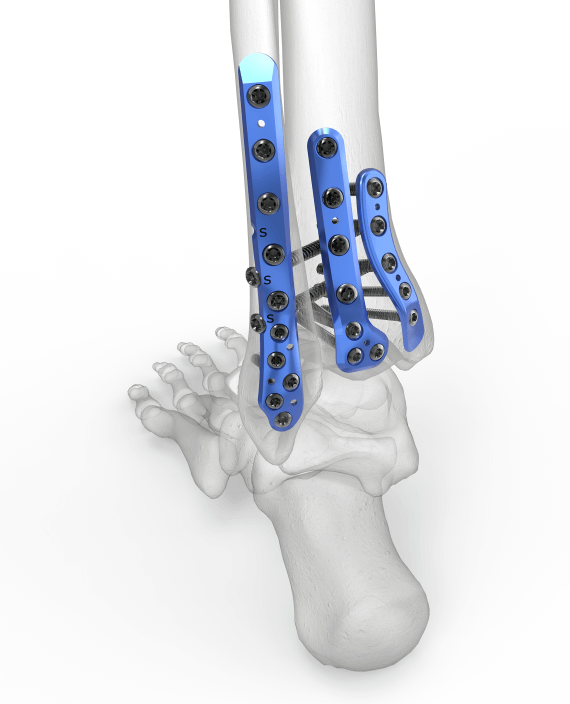